Client Signed Tax Return Without Reviewing it Only To Learn Spouse Had Withdrawn $50,000 From Retirement Funds to Support Affair

Client was devastated to learn that she owed several thousand in interest and penalties for a tax return she had filed with her husband. He put it in front of her in the car and told her to sign without allowing her to review it before turning it in to the preparer.  As he had usually taken care of their taxes, she did not question his action.

The client was unaware that her spouse had withdrawn more than $50,000 from his retirement account the prior year and spent it conducting an "adulterous affair."  She became aware of the affair eventually, and received notices from the IRS for several thousand in interest and penalties.  She made payments and prepared to divorce, only to learn her spouse had a severe form of cancer.  This was a long marriage and she did not feel she could leave him with his illness despite the affair.

Nevertheless, she was concerned that she could not pay the balance due and she did not want to lose her house.  The client and Ms. Rosenblum met and determined that the client was a candidate for innocent spouse relief. Ms. Rosenblum assisted her through the complicated application process and eventually the relief was granted.  The client was not responsible for the tax, penalties or interest related to her spouse's conduct for that tax year.

Tara Rosenblum is a Florida Tax Attorney representing clients statewide before the IRS. For more information on how our office can assist you with your tax problems, please call 239-580-6930. 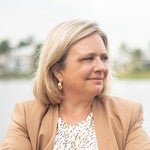 Attorney Tara Rosenblum has devoted the last 18 years to assisting people address issues with the IRS.

Thank you for contacting us. We will get back to you shortly.

Please complete all required fields below.

Rosenblum Tax Law is committed to answering your questions about tax law issues.

We'll gladly discuss your case with you at your convenience. Contact us today to schedule a consultation.